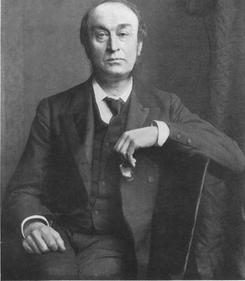 Sydney Ringer – A man who came to Lastingham on holiday, lived in St Mary’s as a holiday and retirement home and who is buried here.  His memorial is not only the way he changed the practice of medicine but also the very extensive “Pearson Restoration” including the wonderful stone roof which contributes substantially to the church we see today.  We are grateful to David Miller, who has brought working parties to the church, for this article about a man who came and stayed in Lastingham and made a difference.

Ringer was a remarkable scientist and doctor, strongly associated with this village and St Mary’s church through much of his adult life. Sydney (sometimes written as ‘Sidney’) Ringer lies buried in the churchyard of St. Mary’s, together with his wife (Anne, née Darley) and elder daughter (Annie). Born in Norwich, he became an eminent London physician as well as Professor of Pharmacology. Ringer owned the lovely house named St Mary’s, in Anserdale Lane, as well as the old water mill which dates from 1800. During his distinguished professional life, Lastingham was his holiday and weekend retreat (his wife’s father, Henry Darley was Lord of the Manor) but it became his retirement home and is where he died (14 October 1910).

Ringer is renowned as the scientist and medical practitioner most properly credited with discovering the correct chemical composition for ‘physiological saline’. This salt solution allows the body’s tissues to function normally even when isolated from their blood supply, for a time at least. It replaces blood in many clinical circumstances. Ringer thus deserves to be as well‑know as other medical pioneers like Lister (for antisepsis) or Fleming (for penicillin), or Banting and Best (for insulin).

‘Ringer’s solution’ has allowed a huge range of biomedical research to be done, especially on isolated cells, tissues and organs. It essentially replaces blood plasma. Most people are familiar with the ‘saline drip’, a common sight in the operating theatre or hospital wards and even at accident sites. All patients can ‘accept’ this fluid into their bloodstream because it only contains salts; there are neither the cells nor the antigens that define blood groups but also bring the risk of ‘rejection’. Doctors and nurses can thus gain valuable time before whole-blood transfusion becomes necessary. Indeed, in many cases, saline alone is sufficient for the patient to overcome acute problems caused by blood loss, shock or dehydration; the body then replaces the other blood ‘components’ over days and weeks, without mishap.

Ringer’s name (usually simply as ‘Dr Ringer’) has been best known to the parishioners of St Mary’s for funding the 1879 ‘restoration’. This major benefaction (to designs by J.L. Pearson, RA) cost over £4000 at the time – perhaps £250,000 today. The restoration commemorated Ringer’s daughter Annie who died tragically at her own 7th birthday party; despite having an eminent physician for a father, she choked on a plum stone.

Any death of a young child is tragic but to choke on a plum stone at a 7th Birthday party is particularly so.  Sydney Ringer channelled his grief however into a substantial work of generosity.  You will see Ringer, and members of his family, named in several of St Mary’s stained glass windows which date mostly from 1879 restoration.